Things to do in New Orleans 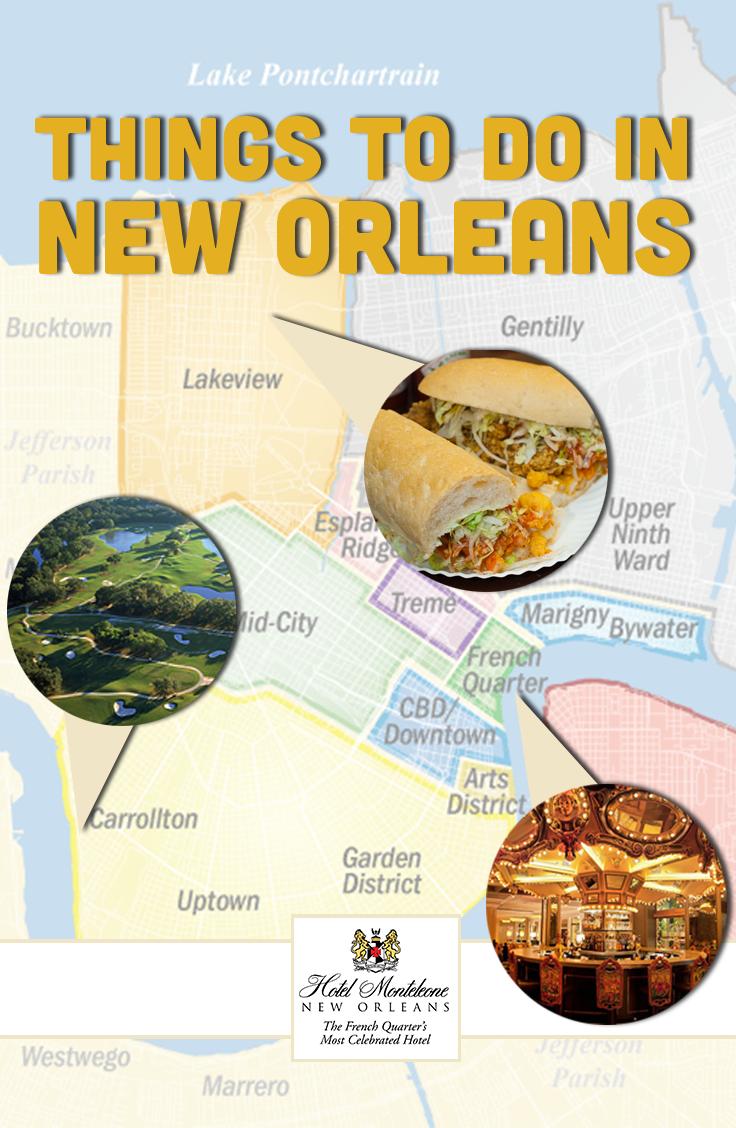 Things to do in New Orleans

Join Us And Experience New Orleans At Its Finest

New Orleans is a city steeped in rich culture, history and tradition. Explore family-friendly attractions like the Audubon Zoo and visit world-class museums, including the National WWII Museum. Take a walking tour of the French Quarter, or venture just outside the city to experience history firsthand as you explore one of many Louisiana plantations that are open to visitors. New Orleans also offers plenty of great opportunities for shopping, dining, and nightlife. Book a room at Hotel Monteleone, and keep reading to learn more about all that New Orleans has to offer.
Explore New Orleans…

New Orleans offers an endless variety of places to explore, including many free things to do. Our very own French Quarter neighborhood features plenty of hidden gems, and the city’s iconic above-ground cemeteries are always worth a visit.

Here are a few more of our favorite attractions:

The Audubon Zoo (6500 Magazine Street; 504-861-2537) is one of the finest in the U.S. and houses more than 1,800 animals. Visitors will find not only exhibits like the Asian Domain (featuring animals like elephants, sun bears, and a white tiger) but also lush foliage and easy access to the Garden District. 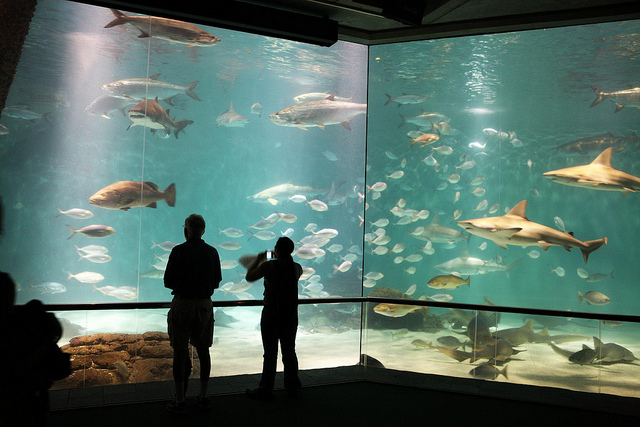 Visit the Aquarium of the Americas to view sea life and even feed stingrays. (Photo courtesy Louisiana Travel on Flickr)

Audubon Aquarium of the Americas

The Audubon Aquarium of the Americas (1 Canal Street; 504-565-3033) features a large collection of aquatic species, which includes animals like sea turtles, sharks, jellyfish, otters and penguins. Attractions like a stingray touch-pool and the Aquarium Wild Walk series, held every Thursday through Sunday from January to May, delight guests and inform them about the array of life within our oceans.

The South’s largest casino (228 Poydras Street; 504-563-6000) is located at the foot of Canal Street. The casino has five lavish New Orleans-themed areas comprising more than 1,800 slot machines and 113 table games, as well as multiple restaurants on-site.

Explore art, history and culture at these museums in New Orleans

The CAC (900 Camp Street; 504-528-3805) has been in the heart of the Warehouse District since 1976. It is the place to find new and exciting expression in the medium of painting, theater, music, performance art, dance, photography, video, sculpture and more in New Orleans. 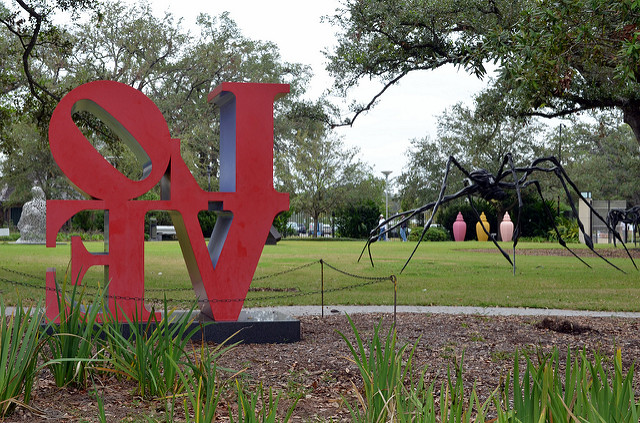 Love is in the air at the NOMA Sculpture Garden in City Park. (Photo via Angela N. on Flickr)

At this stately museum in City Park, you’ll experience New Orleans’ oldest fine arts institution, which opened in 1911 and showcased just nine works of art. Fast forward more than 100 years, and NOMA (1 Collins Diboll Circle; 504-658-4100) plays host to a permanent collection of nearly 40,000 objects that include photography, glass works, French and American art, Japanese and African works, and much more. Just outside, the Sydney and Walda Besthoff Sculpture Garden is home to over 60 sculptures by renowned artists from around the world.

From the beaches of Normandy to the sands of Iwo Jima, The National World War II Museum (945 Magazine Street; 504-528-1944) provides personal accounts, artifacts, documents, photographs, and never-before-seen film footage to tell the stories of the amphibious landings that made victory in World War II possible. Museum collections and relevant traveling exhibitions further explore and illustrate the war that changed the world.

The Ogden Museum of Southern Art (925 Camp Street; 504-539-9650) is home to the largest and most comprehensive collection of Southern art in the world. The museum is also home to the Center for Southern Craft and Design, featuring matchless glass, metal, jewelry, pottery, fabric and wood items – many available for purchase – by Southern artisans.

A visit to both the Hermann-Grima House and Gallier House (820 St. Louis Street & 1132 Royal Street; 504-274-0746) will give you a glimpse into the elegant lifestyle of Creole families living in the French Quarter before the Civil War. While walking through these meticulously restored residences, you will also experience the Golden Age of New Orleans and gain an understanding of the era.

Take a tour of the Crescent City 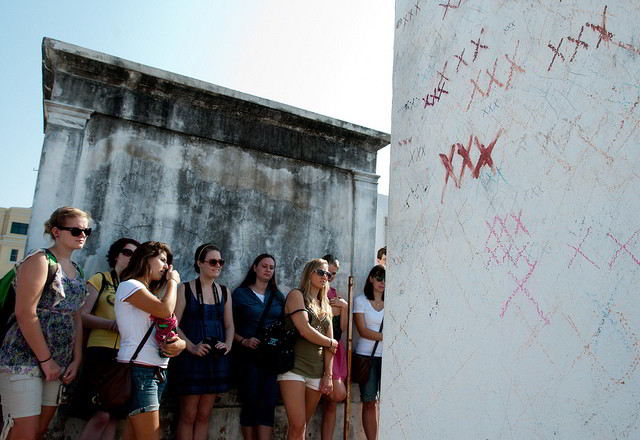 St. Louis Cemetery No. 1 is within walking distance of our hotel, but you’ll need to join a guided tour group to visit this historic cemetery. (Photo via Tulane Public Relations on Flickr)

Learn About The Past At These Antebellum Mansions 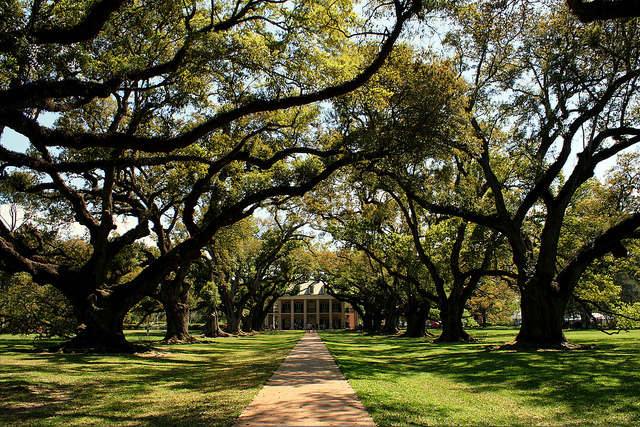 One of the most picturesque landmarks in the state, Oak Alley Plantation (3645 Highway 18, Vacherie, LA 70090; 225-265-2151) is open daily for tours except New Year’s Day, Mardi Gras Tuesday, Thanksgiving Day and Christmas Day. Exhibits give visitors perspective on the history of slavery and sugarcane farming at the plantation, as well as a glimpse into a 19th century blacksmith shop and a Civil War military tent.

After the discovery of an inexpensive method of granulating sugar, Destrehan Plantation (13034 River Road, Destrehan, LA 70047; 985-764-9315) began producing America’s “White Gold.” The plantation flourished, and the Destrehan family grew along with it. One of the oldest plantations in the area, Destrehan is also one of the closest – just a half hour drive from New Orleans.

First it was the happy hunting ground of the Houma Indians, who sold the land to French settlers in the mid 1700s. The Houmas House Plantation (40136 Highway 942, Darrow, LA 70725; 225-473-9380) eventually encompassed a vast 300,000 acres, and by the late 1800s it was producing 20 million pounds of sugar per year, making it the largest source of sugar in Louisiana. In 1963, the classic film Hush, Hush Sweet Charlotte featuring Bette Davis was shot on the property.

Laura Plantation (2247 Highway 18, Vacherie, LA 70090; 225-265-7690) offers daily guided tours that take you through the experiences of four generations of both free and enslaved people who lived here. Based on more than 1,000 pages of documents, the tour explore the lives of the plantation owners, slaves and emancipated men and women of this sugarcane plantation.

The San Francisco Plantation (2646 Highway 44, Garyville, LA 70051; toll free, 888-322-1756) is a National Historic Landmark that is open daily for plantation tours. Dating all the way back to 1856, the plantation is notably different from other nearby plantations in that it features Gothic architecture rather than Greek Revival.

Located less than an hour from New Orleans, Whitney Plantation (5099 Highway 18, Wallace, LA 70049; 225-265-3300) opened its doors to the public in 2014 as the first plantation museum in Louisiana to focus specifically on slavery. Visitors gain a unique perspective on the lives of Louisiana’s enslaved people via first-person slave narratives, exhibits, memorial artwork and restored buildings. The Whitney Plantation may only be viewed by guided tour. Tours sell out on busy days, and reserving tickets online in advance of your visit is highly recommended.

Shop Til You Drop 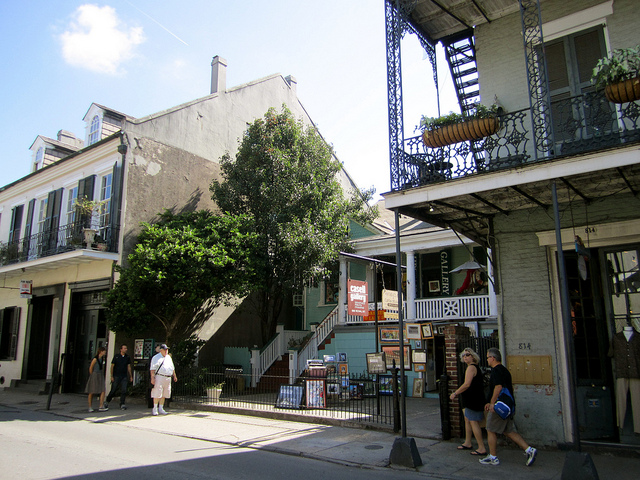 Take a stroll along Royal Street where you’ll find some of the most interesting shops the French Quarter has to offer. (Photo via La Citta Vita on Flickr)

Find New Orleans shopping, entertainment, and cuisine within the atmosphere of the country’s oldest public market founded in 1791. The French Market (1008 N. Peters Street; 504-636-6400) is a tradition as old as the city itself, located on the riverfront in New Orleans’ celebrated French Quarter.

The Shops at Canal Place

The Outlet Collection at Riverwalk

A premier outlet shopping experience located on the Mississippi River. The Outlet Collection at Riverwalk (500 Port of New Orleans Place; 504-522-1555) has shops like Coach, Last Call by Neiman Marcus, Forever 21, and much more.

Specializing in fine literature and rare editions, this small bookstore (624 Pirate’s Alley; 504-524-2940) is a book lover’s treasure chest – and, appropriately, it is located in Pirate’s Alley.

The Shops at Jax Brewery

In a prime location near the river, this former brewery from the 1890s is now a haven for shopping. At Jax Brewery (600 Decatur Street; 504-566-7245), visitors will find restaurants, stores, and proximity to several French Quarter attractions.

This boutique is brimming with brand-new designer finds – at 70 to 90 percent off the original prices. High-end designs from Chloe, Isabel Marant, and Lanvin are all here at UAL (518 Chartres Street; 504-301-4437), as are affordable street labels like Splendid and Velvet. Jewelry, handbags, and shoes put the finishing touches on fashionable looks.

The French Quarter outpost of Goorin Bros. Hat Shop (709 Royal Street; 504-523-4287) harks back to its 1890s roots in Pittsburgh. Hats in all styles top off looks casual and fancy: whether a baseball cap or an old-school bowler, Goorin Bros.’ can find the shape and size that’s right for you with their knowledgeable staff and comprehensive fit guide.

“New Orleans food is as delicious as the less criminal forms of sin.” ~ Mark Twain

New Orleans is famous for its cuisine, with good reason. Indulge and explore the many culinary offerings to be found, ranging from traditional Creole and Cajun cooking to multi-cultural influences like Vietnamese, West African and even Tiki-inspired cuisine. Delicious dining is just a few steps from your room at Hotel Monteleone’s very own Criollo Restaurant. 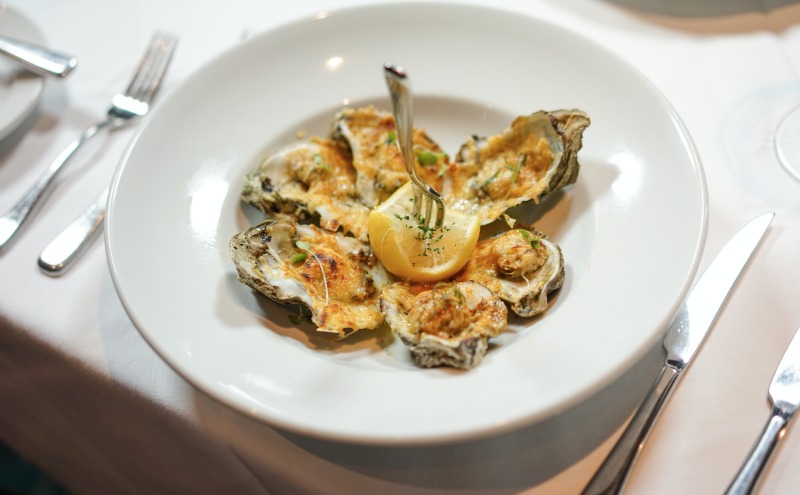 Located inside of our sister property, Bienville House, Latitude 29 (321 N. Peters Street; 504-609-3811) serves up exotic Tiki cuisine and cocktails including options for our gluten-free, vegetarian, and vegan guests.

Continue your exploration of some of the city’s best restaurants on our blog and the blog of our sister property, Bienville House. Get a taste of what the Crescent City has to offer and discover the restaurants that locals love in the French Quarter or check out where to get authentic Creole food. Have something specific in mind? We’ve also rounded up the best spots for brunch and crawfish.

“I’m not sure, but I’m almost positive, that all music came from New Orleans.” ~ Ernie K Doe

Whether you want to watch a Broadway show at the Saenger Theater or spend a romantic date night with someone special, New Orleans offers plenty of things to do after dark. The local nightlife scene offers everything from live music to comedy shows to burlesque, and much more! 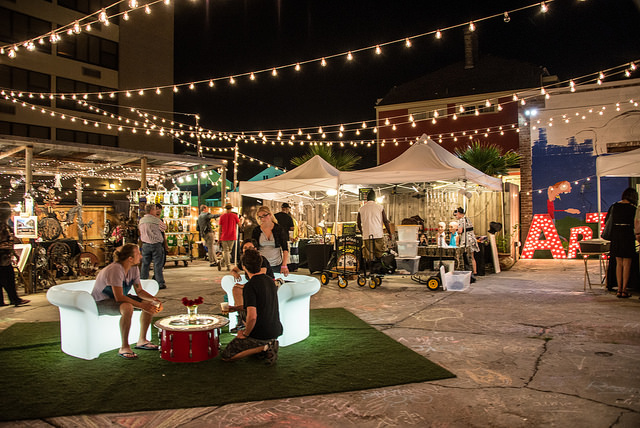 Explore locally made art under a canopy of twinkling lights at Frenchmen Art Market. (Photo courtesy Kent Kanouse on Flickr)

Hotel Monteleone and our sister property, Bienville House, are both LGBT friendly hotels in the French Quarter, located just steps away from some of the city’s best gay bars.

Where to find out what events are happening in New Orleans

In addition to the resources below, be sure to also check our events calendar and our blog for ideas on where to go and what to do in New Orleans.

GoNOLA.com offers an insider’s look at all the best places to eat, drink, shop and play in New Orleans, including upcoming events and a weekly look at things to do in New Orleans this weekend.

Gambit Magazine is a free, weekly news-magazine which can be readily found in coffee shops and restaurants around town. Gambit offers a local’s look at life in New Orleans, and features a full array of event listings each week. Gambit’s event calendar can also be viewed online.

Reserve Your Room at the Historic Hotel Monteleone Today!

Ready to visit New Orleans and experience all that the Crescent City has to offer? Join us and book your stay at Hotel Monteleone today!